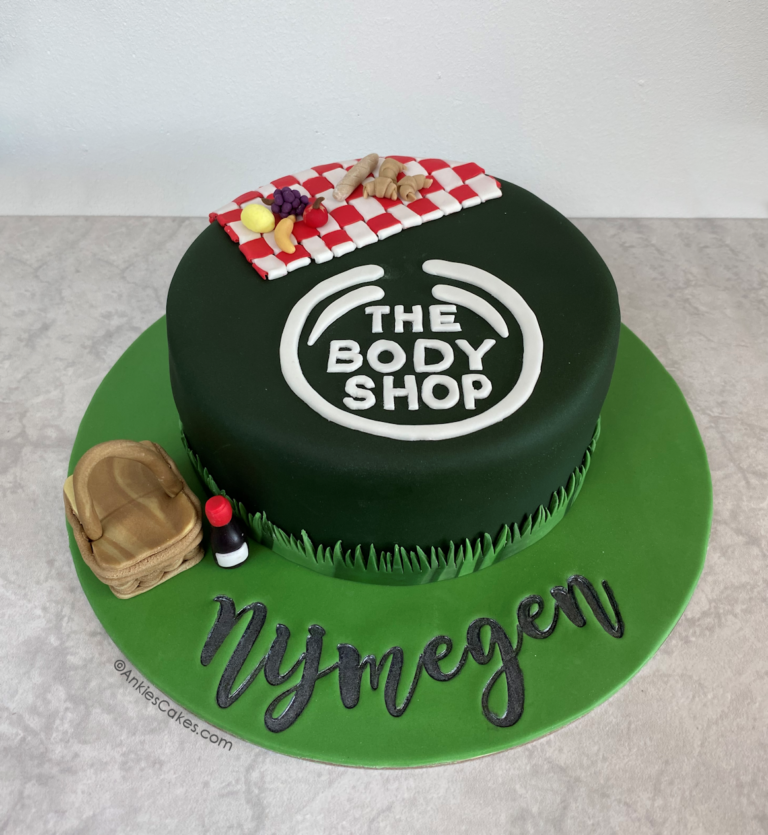 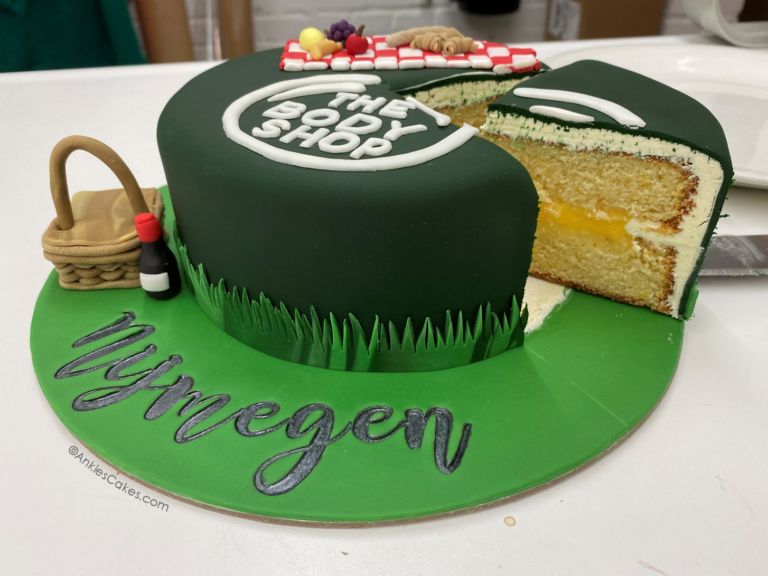 WE WON!!!! Oké, let me explain XD I work at The Body Shop, and they organised a baking contest for all the stores in The Netherlands. So naturally, when I saw that there was a baking contest I told my colleagues that I would make the cake! The description of the contest was that they would like a vegan zesty lemon cake, but it didn’t really have to be vegan or zesty lemon XD Since I don’t bake anything vegan, but I do like lemon I wanted to make a lemon cake with lemon curd and decorated with The Body Shop-green fondant and the logo of course. Everyone really liked my idea so of baking I went.

So first of I made the lemon curd so it had time to cool down. Then I baked the cake, I made a vanilla batter and zested in one lemon and a couple of teaspoons of lemon juice, yum!! Then I baked it in 2 6 inch cake pans. When that was all cooled down I made some Swiss Meringue buttercream. I started by levelling my cakes, then put one cake on a cake card with some buttercream in between, I pipped a border of buttercream around the cake and filled it with the lemon curd. Then flipped the other cake and lay it on top. Then it was crumb coat time. When the crumb coated cake was chilling in the fridge I started on the cake board I wanted my cake to present on. I coloured some fondant grass green and rolled it out. I “painted” on some water on the board so the fondant would stick and lay the fondant over it. Then I grabbed my sweet stamp letters to stamp “Nijmegen” in the fondant. That is the city where I work. And I painted the letters with some metallic black edible paint (I actually just added some black food colour to my silver edible paint XD). When that was done I placed it in the fridge to harden and so the paint would dry. Then I took out my cake and iced it with buttercream and placed it back in the fridge. In that time I coloured some fondant The Body Shop-green and rolled it out. Then I draped it over my cake and smoothed it out so there weren’t any wrinkles.

Then it was decorating time! I printed the logo of The Body Shop and cut it out. I placed the letters on a piece of white fondant and to make it easier to cut out I rolled over it once with my rolling pin, so it left a tiny mark in the fondant. Then I cut out all the letters and placed them on the cake. When everything was cut out I stuck them on with a bit of water. With the leftover green fondants, I made the grass. I marbled the light green with the dark green and cut out some triangles so it would look like grass. I also glued this on with some water. Then I wanted to make some more decorations, and for the contest, we could win a picnic so I thought why not put some picnic stuff on. So from some modelling paste (by CakeDutchess, that is seriously the best!) I made the basked and the bread and fruit. For the basked I coloured some paste wood ish colours and marbled them to look more like a basked. I made a frame from skewers and wrapped cords of paste in between so it would look woven. Then I rolled a cord of paste and pushed some floral wire through so it would stand up, and I bent it to make the handle for the basked. I also cut out a lid en placed that on as well. And the basked was done 🙂 For the fruit and bread, I coloured some more paste in the right colour and formed them. For the croissants, I cut some small long triangles and rolled them from the widest part up. For the baguette, I just rolled a ticker piece of paste and cut some diagonal markings in it. For the grapes, I rolled some small balls and stuck them to each other with some water and put a stem in. And for the rest of the fruit, I rolled some fondant and just shaped it to look like the fruit XD And for fun, I made a wine bottle because it is a little joke at work XD For the last detail which was the blanked I cut stripes of white and red fondant and wove them and rolled them out again so it would be flat. And I just draped that over the side of the cake and placed on the cute bread an fruit.

And that is the cake done! I had a lot of fun making it and I think it turned out soo cute! I went to work to show my colleagues, and when I lifted the lid of the cakebox they all gasped and said that we had to win! The liked it sooo much!! Thank you, girls! Your reactions were amazing! They also said that it tasted really nice as well 😀 And after a couple days of waiting the score of who won came back and they said that we won!! So I’m really looking forward to the picnic!