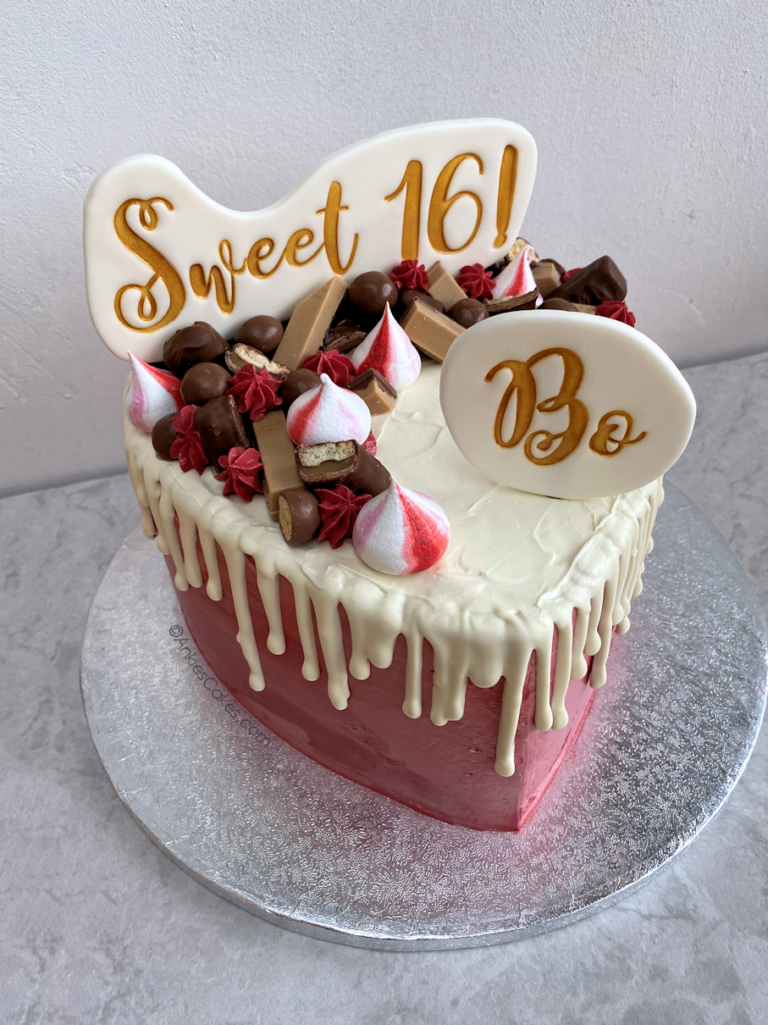 Happy Birthday Bo!!! I hope that besides the lockdown you still have a nice birthday! My teacher asked me to make a cake for her daughters sweet 16. And of course, I said yes!! Although I was quite nerves haha it is a teacher of mine soo… yeah… haha I had fun making it though!

My teacher said just make it a chocolate cake, as chocolaty as you can haha. And she wanted it to be in the shape of a heart, sweet 16 and her daughter’s name on it, and that was it XD She wanted it to be a surprise. So well… I ran with that XD I baked 3 layers of chocolate cake in a heart-shaped pan. For the filling, I made chocolate Swiss meringue buttercream, which is just normal Swiss buttercream but at the end, I added some melted dark chocolate to taste. And let me tell you if you haven’t tried that yet…What are you doing?! XD It is soooooooo tasty!! So anyway haha I knew I wanted to decorate it with candy bars, so I thought why not put them inside as well? It gives some texture because they’re crunchy. So I chopped some candy bars in smaller pieces and sprinkled them on top of a layer of the chocolate buttercream and then added the next layer of cake. I did that one more time on the second layer, so it was layers of; cake, chocolate buttercream, candy bars, cake, chocolate buttercream, candy bars and the final layer of cake. I mean yum! haha I also crumb coated it in chocolate buttercream. When the crumb coat was set I coloured some Swiss buttercream (I had set aside in the beginning) pinkish redish. And I iced the cake with it than I coloured my buttercream even redder and dolloped some on the sides to give it a two-tone look. When you smooth the buttercream they merge a bit together, it gives a watercolour look. Then I wanted a chocolate drip and to make the overall colour of the cake a bit lighter because the candy bars are also chocolate colour. I decided to make a white chocolate drip. Which turned out to be quite a pain haha. I set soooo quickly… Fortunately, the drip was done but when I wanted to spread it on the top everything was already setting so I couldn’t really spread it anymore…. So I had to melt some more chocolate, and poured it on and didn’t wait another second and spread it out immediately! haha it was a bit of stress…. and you can see that it didn’t go as planned… But it could have been worse haha. For the first time dripping a cake with white chocolate, it’s not that bad… I just thought it would be more like ganache but nooo it’s not! haha

Sor for the decorating, I made signs out of fondant saying “Sweet 16” en “Bo”. I used SweetStamp and some gold paint, which always turns out stunning! I made this a couple of days in advance because the fondant needs to dry out and get hard. To give it more support I glued some popsicle sticks to the backside with some piping gel. With those sticks, I could stick them in the cake as well. I lifted the “Sweet 16” By butting a candy bar underneath it, you won’t see it since I was going to cover it with more candy bars and buttercream piping. So with the signs in place, I was on the last bit of the cake wich was filling it with candy bars, buttercream piping and I made some meringue kisses which had red and pink food colouring on the sides. The kisses were also to give more colour to the cake that just red base with chocolate on top. The candy bars I choose were; KitKat gold, Twix and Maltesers. But just choose any candy bar you like! To fill some holes and again for more colour I piped some buttercream as well with a small star tip. Since the chocolate drip was already set I glued everything on with some easy icing (which is just water and powdered sugar till it becomes a paste). This dries hard and is very sticky.

Then the cake is done!! It was really fun to deliver the cake, they were so impressed and happy with it! It made me so happy! 😀 Now to hope they also really like the taste of it haha XD