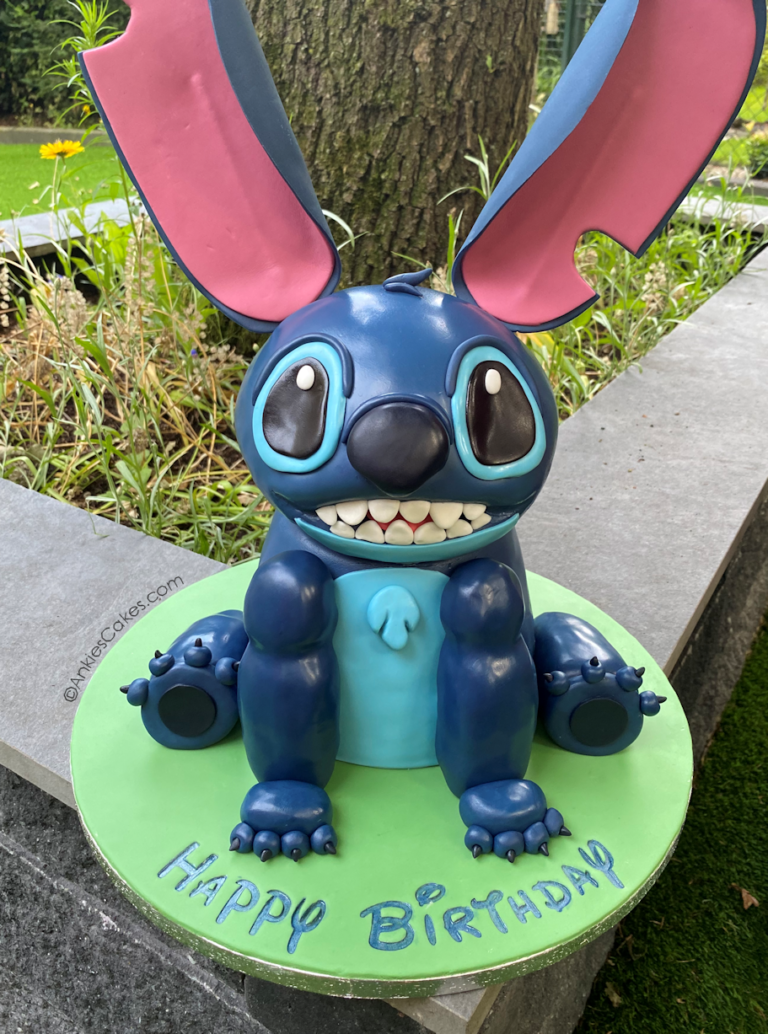 I made this cake for my sisters birthday. She really likes Stitch! And a week before her birthday I thought why not make a cake for her. This is finally an opportunity to bake a cake again xD So let’s do this!! Then I was thinking about what kind of cake. And last year we went to Disneyland together and took a picture with Stich together because she wanted it so badly xD so because of that I decided to make a Stitch cake! 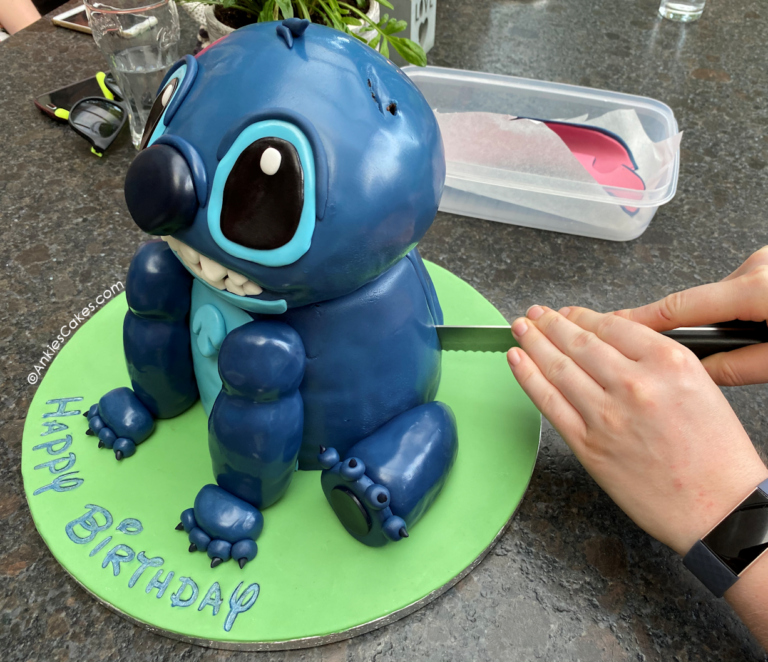 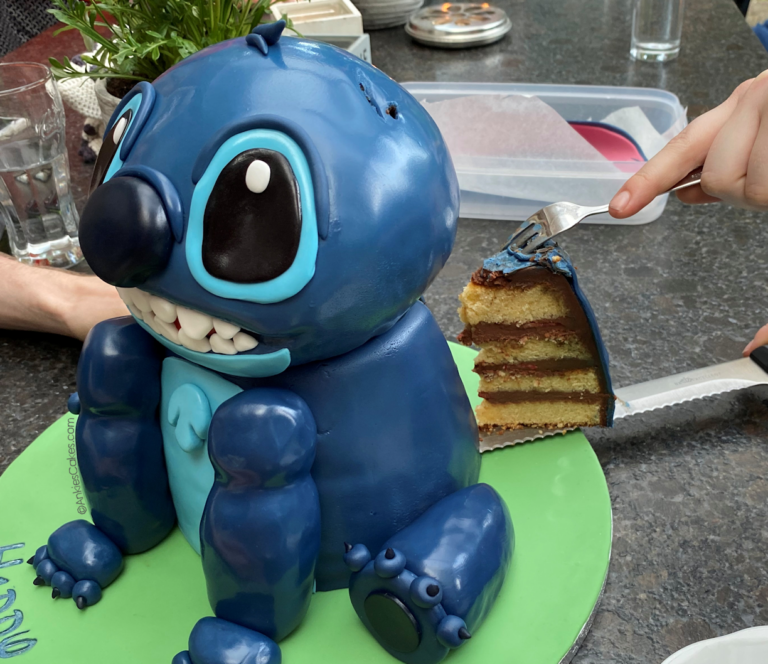 Oké, so let’s talk about the cake xD I got the idea from Charity from her youtube channel called The Lovely Baker. Where she makes it look quite easy xD But as you can see the ears are a bit of haha. I made them first because the fondant had to harden so I took my sphere cake pan I would bake my cake in and drew a templet for the ears. If the ears would have fit on the side of his head (where they should have been xD) I think they wouldn’t look that big. I put a skewer in the middle of the ear so I could stick it into his head at the end but that obviously didn’t go all to plan xD but it was all fine. My family really liked it still 😁

For the cake itself, I baked vanilla cake in two 6” tins and two 6” sphere pans. The two normal cakes I cut in have so I had 4 layers for the body and the spheres I just levelled and stacked them. I filled them both with chocolate ganache and strawberry slices, yum!! For the body, I put a 4” board on top and cut it diagonal to the bottom so it was 4” at the top and 6” at the bottom. Then I crumb coated it with the ganache and started carving the head. I cut a flat bottom on one of the half spheres and placed the 4” cake board there and flipped it. When it was filled and the other half-sphere was on top, I started shaping his head. I made a cake pop mixture from the offcuts and a bit of ganache and stuck it on the sides of his head because Stitch doesn’t have en perfect circular head xD I also cut a bit of cake away where his eyes where gonna be. And I cut his mouth. Then crumb coated it all and put it in the fridge.

Then it was fondant time! I covered both cakes in the Stitch blue. And to be honest I covered his head twice because when I wanted to put his head on top it was waaaaaay bigger than 4 inches… so I had to cut it to shape more, and covered it again. That was quite a nerves part xD because it is a sphere and fondant does not really want to cover that shape nicely. So I took my time and smoothed it as best I could. And to prevent myself from making the same mistake twice I folded the fondant underneath the cake so if the head was still a bit too big you wouldn’t see the ganache. After that adventure xD  I made the cake board by covering it with green fondant to represent grass. And with the help of Sweet Stamp in the fond Magical,

I painted ‘Happy Birthday’ on it. Then I transferred the body cake on top of this board and put some big straws I still had in it for support of the head and put the head on top with some ganache in between so it would stay. Now all that was left was the decorating part 😁
Which is pretty straight forward xD I  just rolled some fondant and cut out what I needed and stuck it on haha. For the arms end legs, I shaped them first with some more of the cake pop mix and when they were set I covered them in fondant. And stuck them to the cake with some water. Apart from the ears, the cake is done! I had to bring my cake in the car for almost an hour in 28 °C so I covered the cakebox in aluminium foil and placed some cooling elements next to the cake, to create some sort of a fridge xD I was very scared that because of the heat the ganache and the fondant would just melt and the cake would collapse but luckily that didn’t happen 😃 So when we were at my sisters birthday she helped me put the ears on. And because I placed the skewer wrong we couldn’t put the ears in the right place. So my sister sad just put them on top xD So or he looks like a scared/surprised Stitch, or he became a combination between him and a bunny xD, either way, I think he turned out pretty cute. Everyone was quite impressed and told me he looked very cute!

To be very honest with you the ears gave me so much stress xD With making them the fondant cracked on me, so I had to do it again. And with putting them in they did not want to stay, so my sister held them up for me while I took the pictures hahaha thanks sis!! That was actually quite funny too hahaha.
All and all I had some stress but also a lot of fun making him! My sister liked the surprise of me bringing him and thought it was so cute! Her reaction when I lifted the box was amazing. I hope you had a wonderful birthday!!