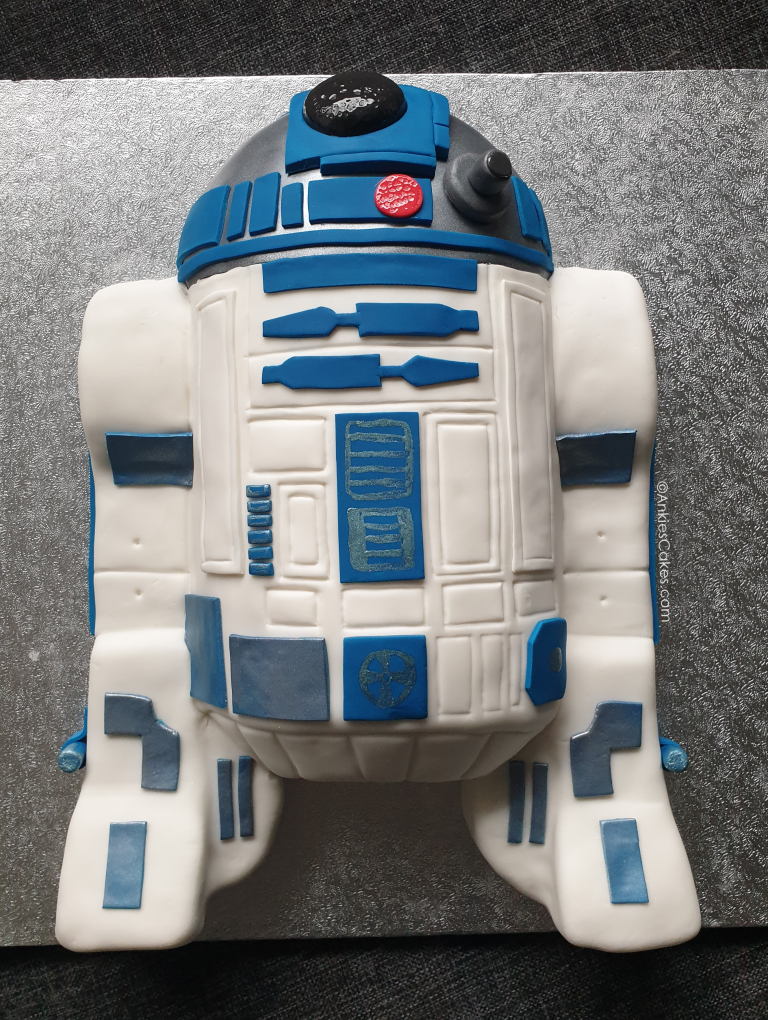 Happy birthday to my boyfriend! We both are big fans of Star Wars, so naturally I had to make him a R2D2 cake. It was so much fun to make! This is actually my first character cake, I think that for a first time I did quite well, if I may say so myself haha.

He really likes chocolate cake so I baked chocolate cake, I used a round cake pan for the head the make the shaping of the cake a lot easier, since it was already round. I had picture of R2D2 near me so I could look at it while carving the cake with a serrated knife to the right shape. After a while of shaping the cake I crumb coated it in Swiss meringue buttercream, after the crumb coat was set I covered it with another layer of buttercream.

For the decorations I covered the head first with black fondant. And since that was the only part just on the cake I could freely dust it with some silver luster dust. Then I rolled out some white fondant and covered the rest of the cake, being careful not to drag the dusted part in the white fondant while smoothing the fondant. After that I made all the other little details, and let me tell you that took some time haha. But I just kept looking at my picture to make sure it was the right shape and placed correctly. I also made indents with a sculpting tool, and a ruler came really in handy! The black eyeball I made by rolling out my black fondant pretty thick and then laid a piece of plastic wrap over it and cut it with a circle cutter. By doing it like this the edges will automatically curve. I also wanted the eye and the red light to be shiny so I painted on some piping gel. At the end I painted al the panels that needed some silver, with silver luster dust diluted with a flavourless alcohol I used vodka (the alcohol will evaporate so you won’t taste it and it is still kids proof). After that my cake was done!

This was quite a difficult cake to make, I measured and calculated the size, pan sizes and how to cut the cake in advance to make it a bit easier for myself when I was making it. But that alone took me at least an hour, then some thinking over and adjusting haha. But it was all worth it! I think it looks really cool! My mom told my she showed it to her colleagues and they were like “A, oke…“ Then she sad that it was cake and the needed to see it again because they didn’t believe her haha.