I made a prison cake! That’s something you don’t hear every day haha XD I made this as a birthday cake, which was super fun and something different for sure! Inside are 2 layers of vanilla cake and 2 layers of chocolate cake and in between on one side filled with strawberry’s and jam en the other side filled with vanilla buttercream and KitKats, yum!! The towers on the corners are actually lemon cupcakes 😀

I started by baking the cakes. I baked one 9×13″ vanilla cake, one 9×13″ chocolate cake and some lemon cupcakes. While they were cooling down I made some Swiss meringue buttercream for the filling and to ice the cake. Then I started to build the cake. I levelled the two rectangular cakes and cut them in half so I had two layers of each flavour. I spread some buttercream on the board to stick the cake to it. Then I laid the first vanilla cake down and spread a little buttercream on to catch the crumbs and so the jam doesn’t totally sink into the cake before people get to eat it. Then with the edge of my spatula, I scratched a line in the middle so I could fill the cake with two different flavours. Since it was a big cake it was super easy and there is a little bit of a choice when you eat it 🙂 So on one half, I spread some strawberry jam and on top, I put some slices of strawberry to make it even better XD On the other half, I spread a bit more buttercream on and sprinkled bits of KitKat on it. Then I piped some buttercream around the edge of the cake, in between the strawberries and in between the KitKats, to make the filling all level so the cake wouldn’t become lopsided XD Then it was ready for cake layer 2, which was a chocolate cake layer. I filled it the same added the third layer which was vanilla again, some more filling and then the last chocolate layer. When that was all stacked I crumb coated it with more buttercream and placed it in the fridge to set. When it was set I needed to cut the holes for the chocolate tools. Because they wanted to have some breakout tools sticking out haha. After that, I iced it one more time to make it nice and smooth for the fondant. After that I started on the cupcakes, which were the easiest to do haha, I just spread some buttercream on so the fondant would stick and be smooth. I also put those in the fridge to set the buttercream. 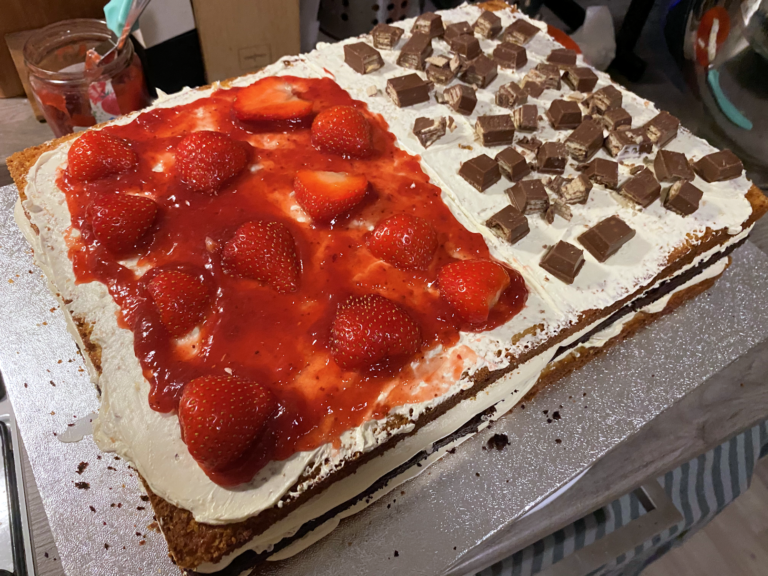 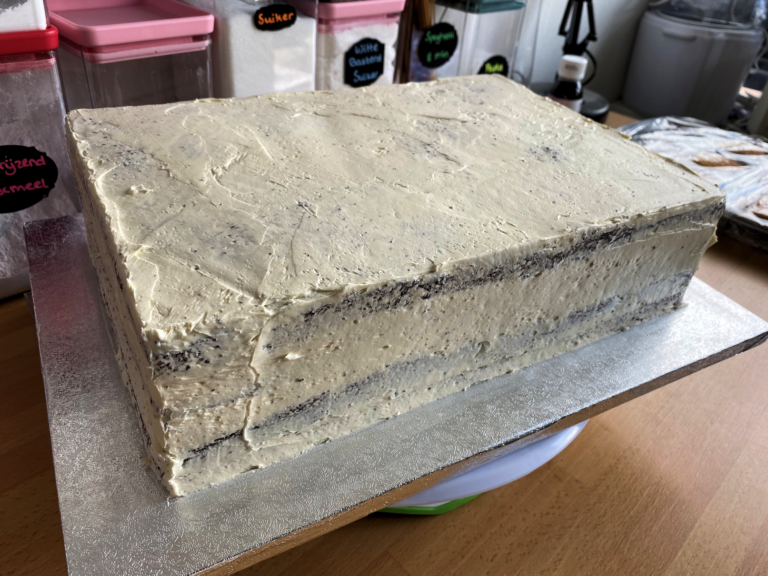 Then it was time for the decorations 😀 I started by colouring my fondant reddish brown (a brick colour). And I bought the black fondant since it is insanely difficult to make a black black fondant. The grey fondant I made by adding a little bit of black to the white fondant. First of I rolled out the black fondant to cover the holes and the top. I choose to cover the cake with panels because it is easier for a square cake and it keeps the corners sharp. I also did it because I wanted it to have a brick texture and when you need to smooth it over the cake you lose some of that texture, which I didn’t want. So I covered the top first with black fondant and cut it to size on the cake, and when it was on I cut the holes again with a circle cutter. Then I rolled the brown fondant and laid the brick texture mat on top and went over it with a fondant smoother to give it that texture. Then I measured the cake where the piece would go and cut a larger rectangle from my fondant. Making sure the bottom was nice and straight. Then I laid it against the cake and with the cake smoother smoothed it against the cake. Then with my ruler next to the cake, I cut the sides that were hanging over. I did that to all four sides. And to make the corners a bit nicer and since towers would go up there I added a brick colour piece, which was a long rectangle also textured, I glued that on with some water. Then I covered the cupcakes with grey fondant on the bottom and black fondant on top. To give it something more (and hide the seam XD) I rolled a cord of fondant and wrapt it around the seam. Then also 4 cords on the top as a roof.

Then I started making the windows. There were 8 windows on the building itself, and 16 smaller ones on the towers. I made the big ones by cutting a white rectangle. Then I rolled the black fondant and cut strips from it, cut them to the size of the window and glued them around the white pieces with some water. After that, I rolled the grey fondant and cut very small strips from it and them to the length needed for the window and glued them in place with some water. When they were all finished I sorted the ones together which looked the most the same, and added them to the cake. Two on either side, three in the back and one in the front. Then I made the door by rolling out some grey fondant and cut a rectangle from it. I scored a line in the middle with my ruler and made door handles with a bit darker grey. And stuck that to the cake as well. Then only the towers needed windows so I made them the same way I did with the other windows but smaller and the black outline was only on 3 sides. Since I had the roof on the tower was nicely divided in four, so I could place the windows evenly. Then I placed the towers on the cake with two toothpicks to hold them in place (mainly for travelling with the cake) and with some water for glue. The barbed wire I made with grey fondant which I cut in tiny strips and wrapped around a rolled up piece of kitchen paper. I let them sit for a couple of hours to make them hold their shape. Putting them on though was another task haha, had to be patient and took my time. And with that one, the cake is finished 😀

The tools were added just before serving because the cake didn’t really fit in the box with them haha XD They really liked my cake, and I even got a compliment about my buttercream from a chef, which made me very happy!