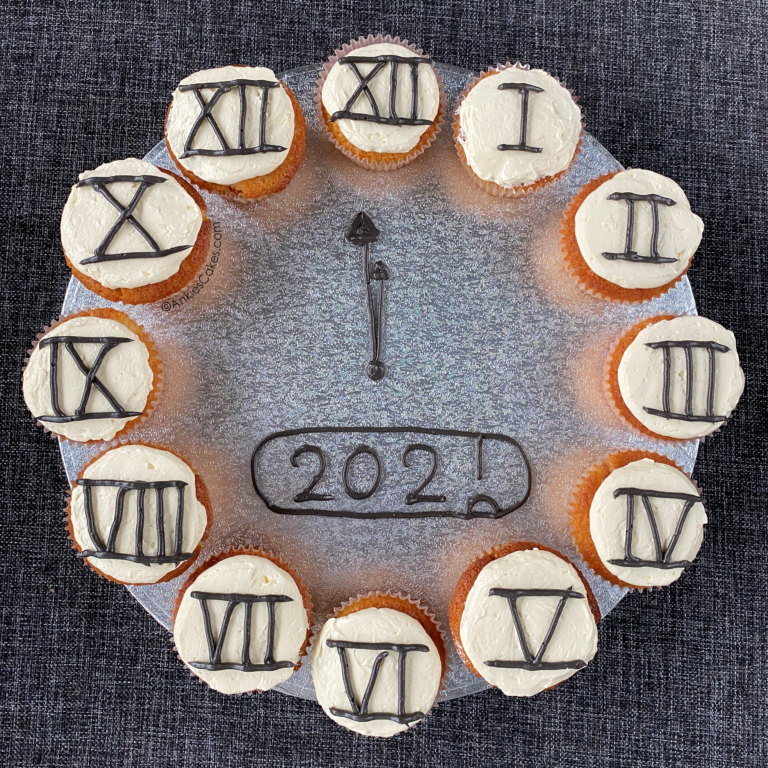 Happy New Year everyone!!!! This year I wanted to bake something for the new year. I actually never done that so I didn’t really know what to make. But I thought it would be funny to make a clock. I also didn’t want it to be a mega cake because we only had 1 friend over for new years eve. So cupcakes would be perfect!

Since I didn’t really know what flavour to make the cupcakes I asked my boyfriend. And I could have guessed the answer haha because it was of course apple cupcakes, his absolute favourite, doesn’t matter if it is in a cupcake a loaf cake or a big cake XD He always wants apple cake hahaa. So I made him apple cupcakes 🙂 I made them by making my favourite vanilla cupcake recipe and added apple sliced that were sprinkled with cinnamon. First I filled the cupcake cases with the batter than I added in the slices pushing them in one by one. They do take longer to bake because of the moisture that is in the apples.

For decorations, I made Swiss meringue buttercream and piped as flat as I could with a round tip. To make it smoother I levelled it with a pallet knife. With the leftover buttercream, I melted some dark chocolate and added it in, to make it at least a bit darker. I wanted the piping to be black, and starting from white takes a lot of food colouring… So the chocolate made it darker and from there I just added food colouring till I like the colour. I first piped the hour hands and the 2020 going into 2021 (I just thought that was funny XD) Then I placed the cupcakes around and stuck them on using a bit of the black buttercream. When they were all spaced nicely I started the number piping. I choose for Roman numerals, also because there are just straight lines haha. And then I was done! I quite like how it turned out. It could have been a bit neater but my piping skills are not yet there haha.

Hope you have a wonderful 2021, at least a better one! Which can’t be that hard right?!