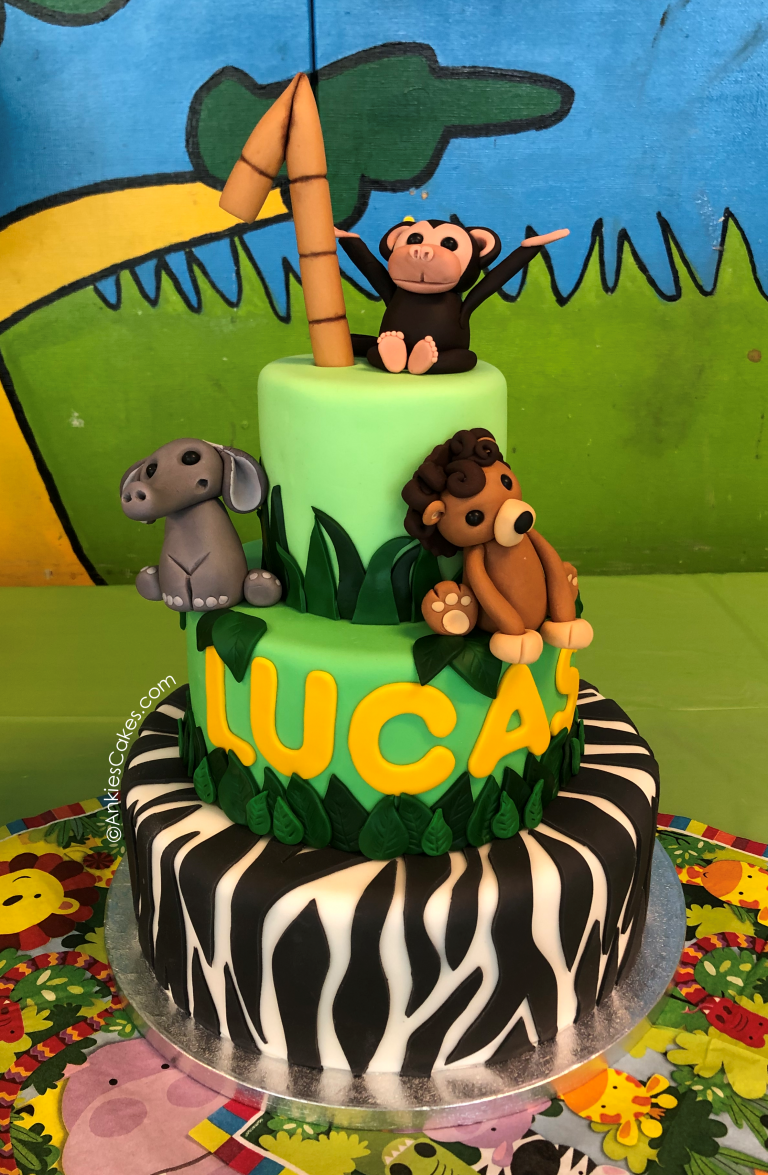 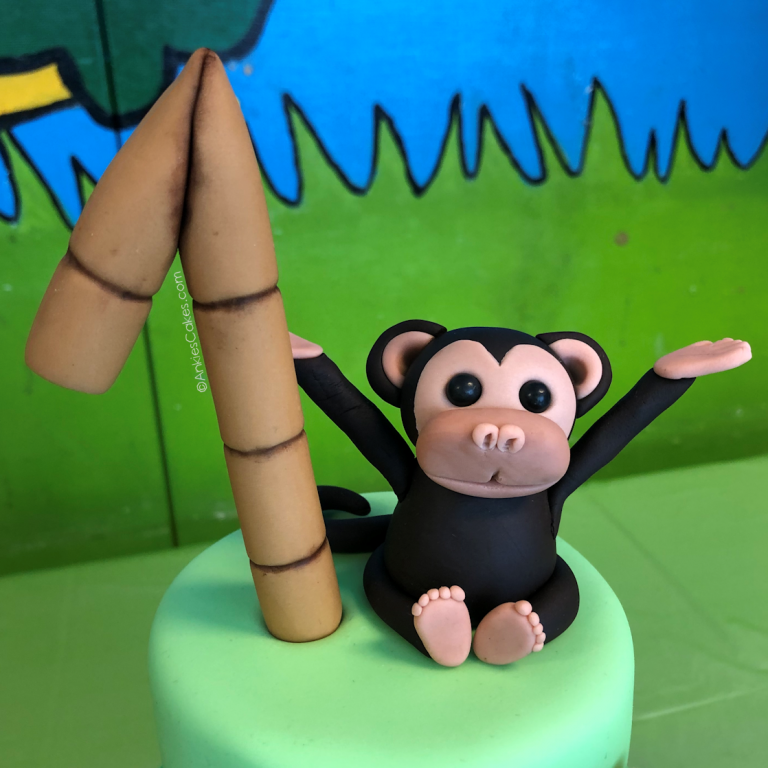 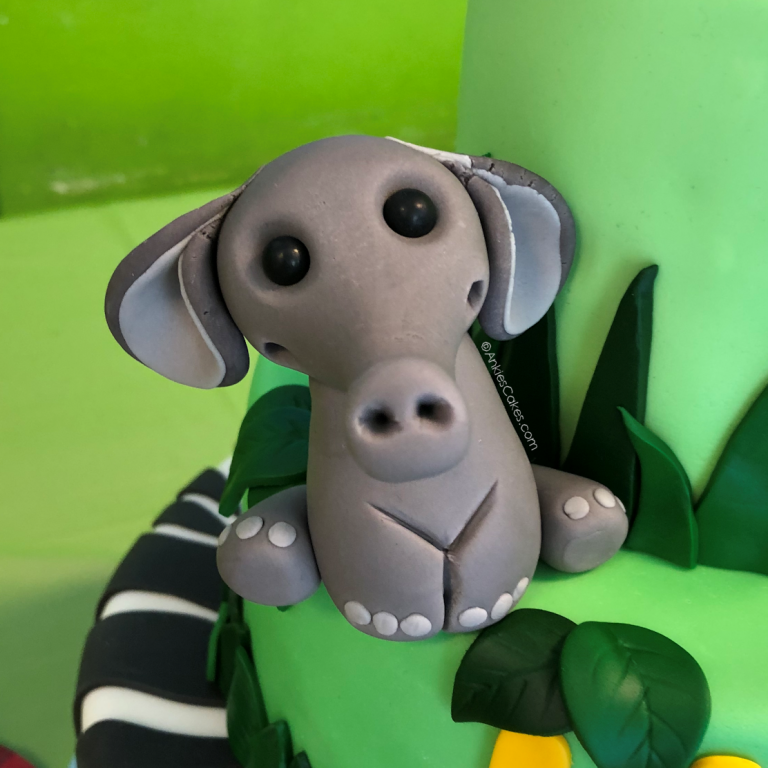 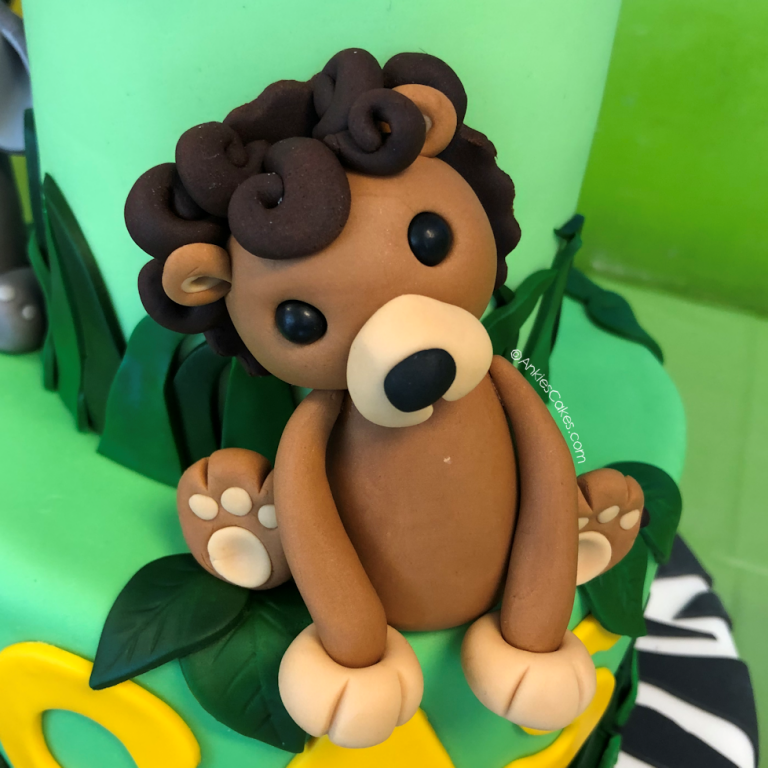 The Nephew of my boyfriend turned 1, and his mother asked me to make him a birthday cake that is jungle themed. She sent me so many pictures for inspiration, and this is what I came up with.

The bottom layer is chocolate cake with a banana flavoured buttercream filling, Swiss meringue buttercream on the outside.

For the decorations I made the cake toppers a couple of days in advance so they could really set and harden. And to save some time and stress right before I had to deliver the cake haha. The cake toppers are made out of modeling paste from CakeDutchess (which if you don’t know it yet is the best modeling paste there is! haha) and shaped with the help of the CakeDutchess modeling tools and her book. When the cakes were baked and covered in buttercream. I went and covered them in fondant.

I covered the bottom layer in white fondant, then I rolled out some black fondant and randomly cut some “zebra” strips. And placed them on the cake. That was actually all for the bottom layer XD.

For the middle layer I covered it in green fondant, than I rolled out some yellow fondant and cut the letters for Lucas out, and stuck them to the sides of the cake. For the leaves I coloured fondant 3 different shades of green. Than I cut them out using different sizes leaf cutters. And to give them some more detail I scored veins into them using a dresden tool.

The top layer I covered in a slightly lighter shade of green than the middle layer. Then I cut some triangles from the same fondant as I used for the leafs, I gave the grass (triangles) some shape by bending them slightly in different directions, and made some bigger and other smaller. Just like the animals I made the 1 out of modeling paste a couple of days in advance. For this one that was really important because this really needed to keep its shape to stay upright. This is also a peace of uncooked spaghetti in there for support. I used spaghetti because it is edible, since it is a cake for a kid. Looking back on it I might have been better to just stick a skewer in there since that is way more sturdy and the 1 started leaning a bit… But it made it through!

I had to transport this cake in the car for an hour, and this was the first time I ever made this big of a cake. So you could maybe say that I was super very massively nervous to do this haha. I had the animals and the 1 in separate boxes and not yet on the cake since that could only go wrong haha. I took some piping gel with me (that is basically addable glue XD) and stuck the animals and the 1 on while I was there. Which still was very nerve wracking because I had some eyes looking at me XD They were just so curious haha.

At the party were a lot of people I didn’t know, and some of them saw the cake and then came to me to ask if I made it and to say WOW! haha That was so much fun! I’m so happy she (the niece of my boyfriend) asked me to make the cake for her son, it was a lot of doubts and stress but so much fun as wel!