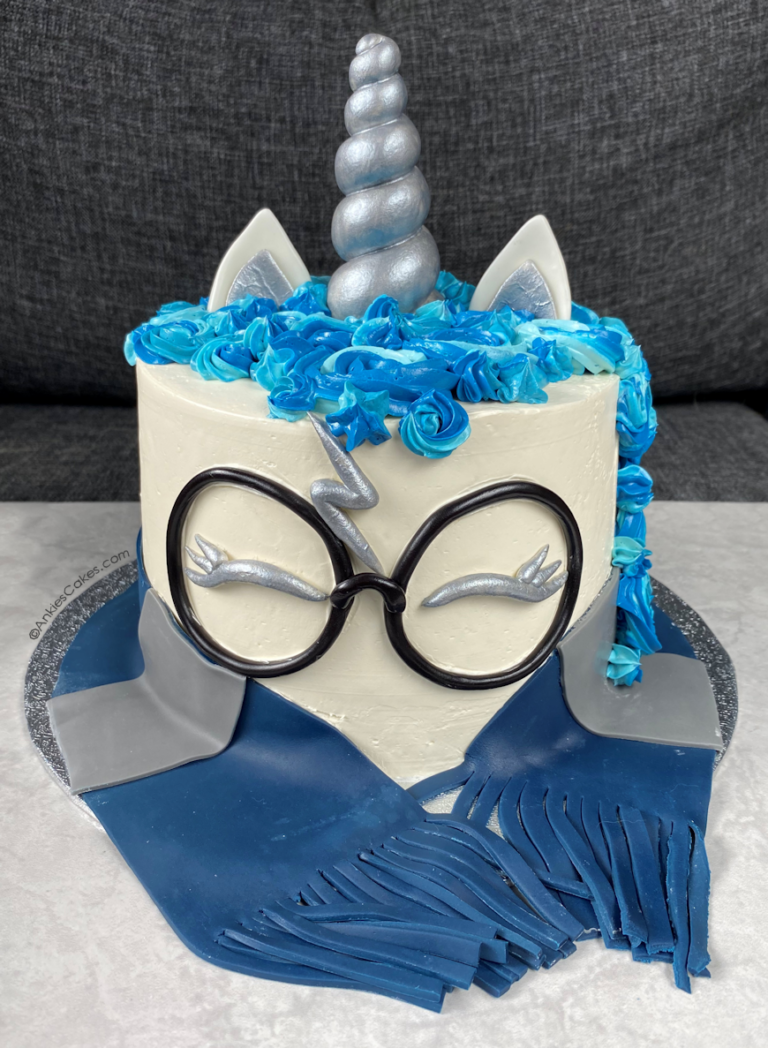 It’s my birthday!!! Yes, I’m that only 20+ year old still excited for her birthday haha. So I wanted to make myself a birthday cake, and since I’m such a Potterhead I really wanted to make something Harry Potter themed. But then I also really like unicorns XD So I combined the two and made a Harry Potter Unicorn cake!! And since I am a Ravenclaw I decided to make him in the Ravenclaw colours. So with a plan in mind, I went on baking!

I started by baking the cake, I wanted something tasty but also not so usual… I really like vanilla cake but that sounded a bit boring so I added a layer of brownie!! Yes, BROWNIE!!! YUM!! So I had two 6 inch vanilla cakes, and one brownie. I baked the brownie just in a brownie pan and laid a layer of the vanilla cake on top to cut it to the same size. So then I had 3 layers of cake. So for the filling, I asked my boyfriend and he always likes it when I put strawberries in my cakes XD So what better to pair with strawberries than chocolate! So I made Swiss meringue buttercream, and to about a quarter of it, I added some melted chocolate. I used milk chocolate since that’s my favourite. Make sure your chocolate is not just melted because it will be too hot and melt your buttercream, melt it and leave it for about 10 minutes than it is fine. Then I halved my strawberries and started layering. I started with a vanilla cake, then I added the smallest amount of chocolate buttercream so there is just a little barrier so the strawberries won’t drain out into the cake, then I piped a border of chocolate buttercream on the edge of the cake and placed in as many strawberries in it as I could fit haha. Because the strawberries a wonky shaps and you don’t want to push them around, so I piped the buttercream in between them so there was no air trapped inside. Then I levelled the buttercream out with an offset pallet knife, added the brownie layer on top, and filled this layer the same. I finished with another vanilla cake layer. After the stacking was done I crumb coated the cake with vanilla Swiss meringue buttercream, and refrigerated it for 30 minutes. When it was cold and firm, I iced it with the vanilla buttercream and made sure it was as smooth as I could get it because I wasn’t going to cover this cake in fondant. 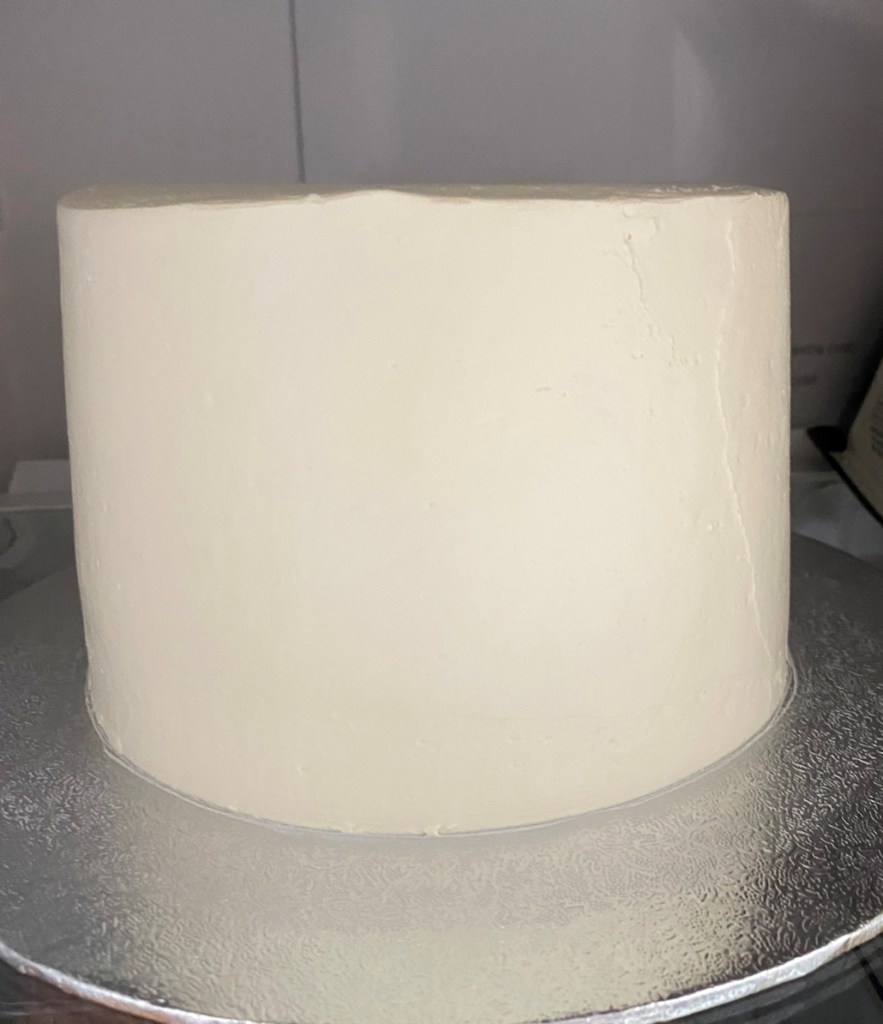 Then it was time for the decorations! First of I wanted to make all the silver pieces because they had to be painted and dried. So I started on the horn, I rolled a cord of white fondant, which was tapered, so skinnier on one end and way thicker on the other end. Then I brushed on some water on a cake pop stick and rolled the fondant cord around the stick, when I was satisfied with the length I cut the fondant with a knife so it had a flat bottom. To make sure the horn would not get a flat side from laying on the table, I poked it in a cake dummy (that is just a block of styrofoam). Then I made the eye’s by rolling a cord of white fondant and tapering it at the ends and did the same for the lashes and glue them together with some water. I made the scar in the same way just a cord tapered at the ends en shaped into a lightning bolt. For the ears, I made some triangle ear shapes. Then when that was al made, I made some silver paint, by mixing silver luster dust and some food grate alcohol (I used vodka) until you have a nice paint. I always try it on some scrap fondant to see if the coverage is good. Then I painted all my pieces with it and left them to dry (the alcohol will evaporate off). After that was done I started making the rest, I coloured some fondant black, blue and grey. And with the black fondant, I rolled a cord and wrapped it around a circle cookie cutter, to make sure it would still be a circle on the cake XD I held up the cutter to the cake and carefully pressed the fondant to the cake. I did the same with the other part of the glasses and added a tiny cord in the middle for the nose piece (this also hid the seams from the circles). Then I added on the eyes, the scar and the horn. Since you can’t push on the horn itself because you will poke the cake pop stick right through I took scissors and pushed the horn in the cake from the stick. Then I glued the silver parts of the ear to the white parts of the ear, and placed them next to the horn. Then I made the scarf, by rolling a long piece of blue fondant and added thin rectangles of grey over it and made some cuts at the ends for the frayings. I placed this around the cake. And for the last bit, I coloured my leftover buttercream 3 different shades of blue, put them in my piping bag (so all three would come out at the same time) and piped om some rosettes.

And that is the cake finished! Some things were kind of a struggle but overall I had fun making the cake, I have never really decorated a buttercream cake with fondant, so that was a good learning experience since it is different to sticking on something to fondant you can just pick it up and place it somewhere else but with buttercream, it will leave a mark XD. I hope you all like it as much as I do 😀 Have a great day! 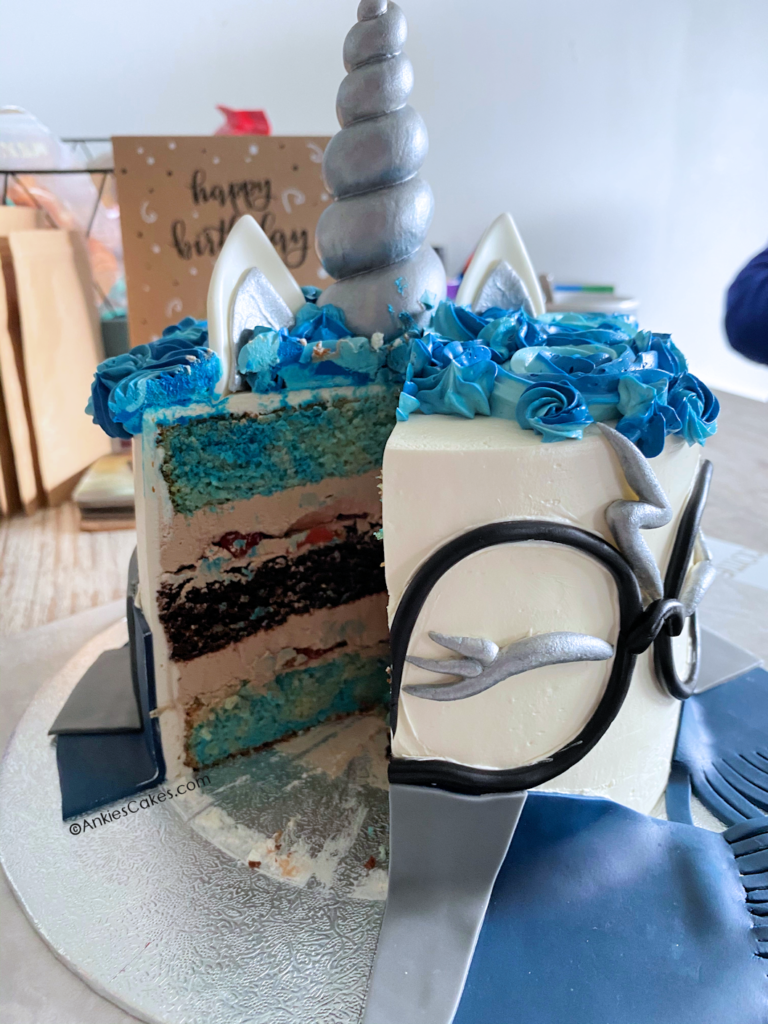